The Elf of Plants*

Today's Wonder of the World is...Mushrooms! 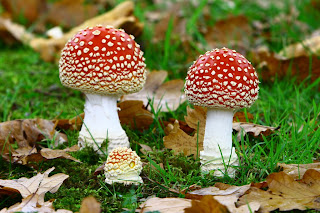 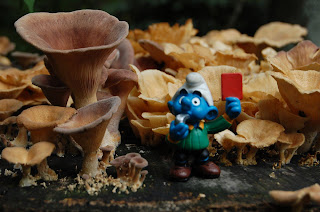 Flickr photo by micpohling
The Smurfs! (By the way, did you know that the Smurfs weren't invented by Hanna Barbera? The Belgian cartoonist Peyo began putting them in comic strips back in the fifties. The French love them. At least they seemed Smurf-happy when we were there.)
Just a little fun fact. Mushrooms, with a side of smurfs!

Back to mushrooms...
Did you notice those freaky funnel shaped mushrooms beside the police smurf? Weird.
But mushrooms specialize in weird!
There are mushrooms that look like ruffly chiffon. 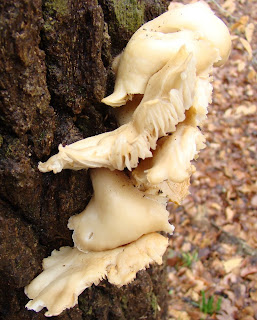 Flickr photo by KHall65890
And puffballs that smush into a cloud of mushroom dust! 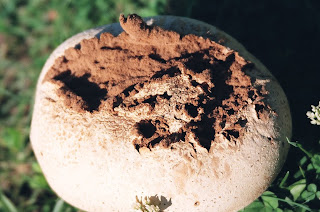 Flickr photo by Tatemae
(Yes, smush is a technical mychological term. Not really.)

Some mushrooms are just too beautiful to be true 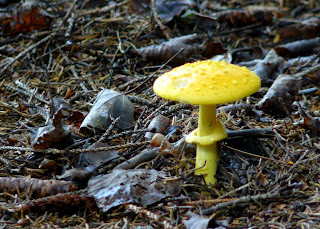 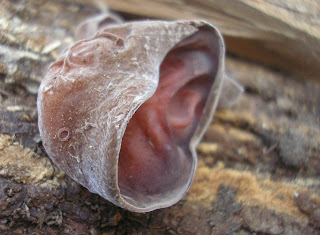 Flickr photo by niknack
Some mushrooms could be parasols for beetles. 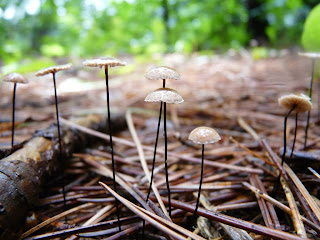 Flickr photo by Lev Frid
And others are real parasols for ladybugs! 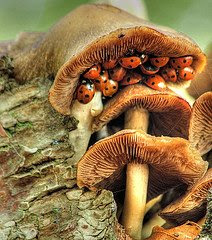 Flickr photo by idg
And still others are parasols for humans! 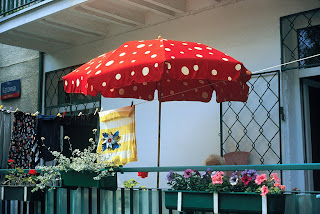 Flickr photo by VonMurr
Wait a sec. That's no mushroom.
Still, it'd be fun to sit beneath one of those. 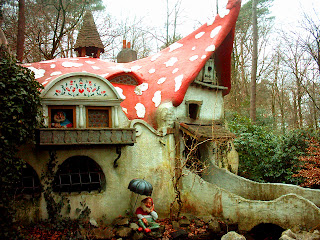 Flickr photo by serni
Or inside a mushroom house. With the gnomes and the fairies.

Or in this one. With humans who like strange mushroom-like architecture. 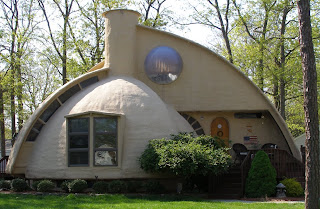 Flickr photo by agilitynut
Cavemen probably liked mushrooms too. Or at least cave-boys. 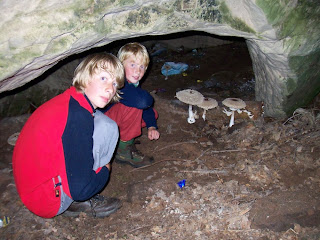 While some mushrooms offer showers themselves! 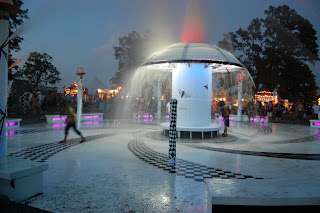 Flickr photo by pthread1981
If you don't get your recommended daily allowance of mushrooms, you could always make one.
Out of paper... 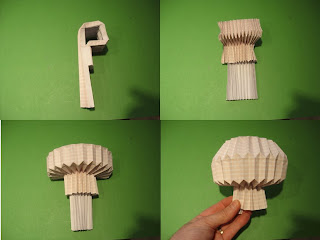 Flickr photo by firstfold creative origami
Or marzipan. Or meringue! 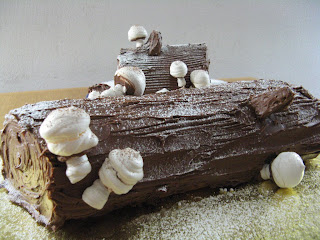 Those French love their cèpes. One of my few regrets from our years in France is that we never made time to go mushroom hunting. Did you know that if you go mushroom hunting in France, your local pharmacist can tell you whether your mushrooms are safe to eat? It's true!
And that's a good thing. You could eat a bad one, and the next thing you know, you'd have scary mushroom visions of the Eiffel Tower! 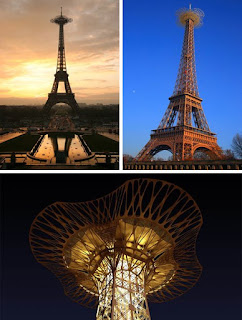 Photo by Serero Architectes
No, I'm not hallucinating and neither are you.
Have you heard about this?
It's the Eiffel Tower, all dressed up for it's 120th anniversary with a brand new screening deck, designed by the Paris based architectural firm, Serero.
What do you think?
Don't get too used to the look because as it turns out, it's just a hoax. I'm still a little confused by this, but you can read all about what could have been, HERE.

Have a Wonder-full Tuesday, y'all!
But before you go, watch this incredible time lapse mushroom video!
Les Schtroumpfs, this one's for you!


Love, Becky
*Title taken from Emily Dickinson's poem, The Mushroom is the Elf of Plants, HERE
Rebecca Ramsey at 7:30 AM
Share

Ooh boy, do I love your comments!
Thanks for stopping by!